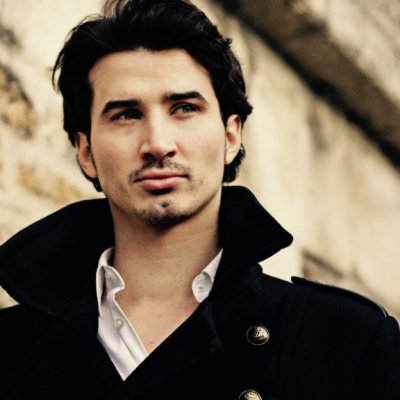 Jeremy Duffau was born in Saint-Germain en Laye (France) and began studying music and the saxophone at the age of 9. At 18, he joined the International acting school Florent, where he works drama, vocal art and dance. During these years, he discovered his tenor voice and his passion for Opera, especially when he sang Tony in the Bernstein’s West Side Story. He then entered the conservatory of Saint-Maur in the class of Yves Sotin, where he graduated three years later, the gold medal in vocal art and chamber music.

He works the repertoire with a coach of Paris Opera, Claudie Martinet, and has participated in master classes with Raul Gimenez, Nicola Martinucci, Sylvie Valayre, Sabine Vatin and Felice Venanzoni.

During the Conservatory, he began singing Oratorios in Paris : the War Requiem by Britten, the Dixit Dominus by Haendel, the Lauda Sion by Mendelssohn, then the Mass in Cand the Coronation Mass by Mozart. On stage, he sang Belfiore in Mozart’s La finta giardiniera, Gontran in Les Mousquetaires au Couvent by Verney, as well as Don Ramiro in the Rossini’s Cenerentola.

He started his career in concert with the french soprano Nathalie Manfrino at the Théâtre des Champs-Elysées and at the Massy Opera, then he sings the Rossini’s Petite Messe Solennelle with Julie Fuchs and Nora Gubish in a staged version, under the baton of Jean-Claude Malgoire in Tourcoing, and Poiretapée in Offenbach’s Mesdames de la Halle in the Opera studio of Lyon National Opera House.

For the 12-13 season, he was a member of the Opera studio at the Opéra National du Rhin (Strasbourg) where he has sung Lechmere in Owen Wingraveby Britten, Gonzalve in L’Heure Espagnole by Ravel and Rubi in the french creation of Snow White by Marius Lange. He has sung also a Verdi recital at the International Music Festival of Colmar and Léodès in Fauré’s Pénélope at the Théâtre des Champs-Elysées with Roberto Alagna and Ana Caterina Antonacci.

Jeremy Duffau began his 13/14 season as Ernesto in Donizetti’s Don Pasquale for his debut at the Finnish National Opera in Helsinki, after wich he returned at the Théâtre des Champs-Elysées in the role of the first officer in the production of Olivier Py of Poulenc’s Dialogues of Carmélites, with the Philarmonia Orchestra conducted by Jérémie Rhorer. He sang the tenor solo in the Rossini’s Petite Messe Solennelle in Tourcoing, le Laboureur in the Chausson’s Roi Arthus at the Strasbourg National Opera House. Then, he sang Tamino in a new production of Mozart’s Die Zauberflöte in Paris Theatre des Variétés …

During the 14/15 season, Jeremy sang Malcolm in a new Mario Martone’s production of Macbeth at the Théâtre des Champs-Élysées, conducted by Daniele Gatti, Tchékalinski in a new Robert Carsen’s production of the Tchaikovski’s Queen of Spadeat the Strasbourg National Opera, Gastone in La Traviata at the Vendeespace, highlights of Rigoletto in concert in Val de France and opera concert with the pianist Jeff Cohen .

During the 15/16 season, he has sung in Il Trovatoreat the Toulon Opera House, Samson et Dalila andSemiramide at the Bordeaux Opera House, Nabucco and Sauguet’s Les Caprices de Marianne in Saint-Étienne Opera House and some concerts in Radio France, Monte-Carlo and Paris.
He is also nominated to les Victoires de la Musique 2016 (French Classical Awards) as Révélation lyrique de l’année.

In 2017-18, La Belle Hélène (Offenbach) at Nice Opera House and in another production in Mérignac and Zénith of St- Etienne, Marouf (Rabaud) at Opera National de Bordeaux and Opéra-Comique in Paris or Dialogues des Carmélites in Bologna and Samson et Dalila at the Théâtre des Champs-Élysées …

Among his projects, Gastone in Traviata at Bordeaux Opera House, Pâris in Offenbach’s La Belle Hélène in Marseille,

Laërte in Hamlet at Saint-Etienne Opera House, Eustazio in Rossini’s Armida and Abdallo in Verdi’s Nabucco at Marseille Opera House.